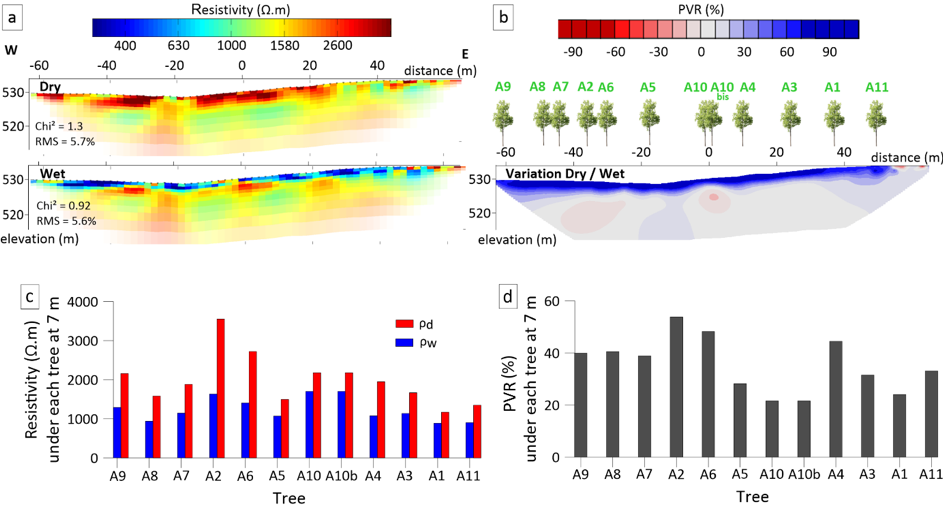 
Inter-individual variability of tree drought responses within a stand has received little attention. Here we explore whether the spatial variations in soil/subsoil properties assessed through Electrical Resistivity Tomography (ERT) could explain variations in drought response traits among trees.•

We found significant correlations between PVR and biological variables. For Ψ, the nature and strength of the correlations vary according to the level of drought intensity. The correlation between Ψ and PVR was positive during well-watered conditions in the upper layer (0–2 m) and during water-limited conditions in the deeper layer (2–5 m). During most severe droughts, however, the Ψ was negatively correlated with PVR in the upper layer. Trees with lower PVR in the upper layer were also associated with water use efficiency (higher δ13C), higher LMA, and a lower level of defoliation after extreme drought.•

Overall, our results indicate that local differences in soil/subsoil properties affect tree response to drought and suggest that less favorable soil/subsoil conditions (lower PVR) can lead to lower water stress during the driest period and to lower defoliation after extreme drought. Plausible explanations for this better acclimation include higher stomatal regulation and improved deep soil and subsoil water exploration by trees located in more adverse conditions. We encourage the development of ERT in ecological studies to further explore the interrelated relationships between soil/subsoil, climate, and tree functioning.